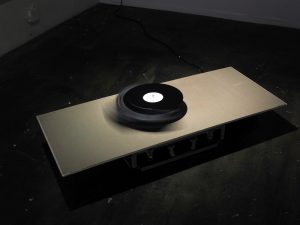 Brussels based sound artist. Yann Leguay is a true media saboteur. He seeks to turn reality in on itself using basic means in the form of objects, videos or during installations and performances involving the materiality of sound and data storage. His flagrant disregard for the accepted norms of audio behaviour appropriates industrial machinery and other DIY tools for the playback of audio media: using an angle grinder to perform the live destruction of an audio signal or to playback a CD at dizzying speed.

His release activity is equally deviant, releasing a 7” single without a central hole and a record composed from recordings of vinyl being scratched by scalpel. His Phonotopy label proposes a conceptual approach to recording media and he curates the DRIFT series on the Artkillart label which overlays several grooves onto a single record, causing randomised playback.

For Titanik, he has developed an audio instrument transforming hard drives into an unpredictable miniature turntable/synthesizer and certainly presents a try to cancel the time passing (what happens if you run as fast as the earth speed around the north pole in the reverse direction ?).