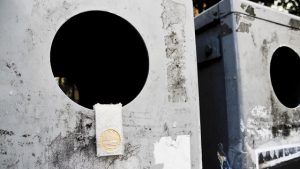 Mateusz Pozar is an artist based in Sweden, and the current artist in residency at SUMU / Arte, located in a studio of gallery Titanik, Turku.

He has a BA in photography and an MFA from the University of Gothenburg, where he graduated in 2007 and remains today. In Gothenburg he has been working with solo works as well as a founding member of SKUP PALET.

He’s interested in the definition and usage of art, and many of his projects walk the line between art projects and mundane work. With a background in activist journalism and media production, he wants to explore how the power of narrative affects us, and who has the power to narrate what.

Previous projects involve making lock-picks and teaching people how to bypass mechanical locks, doing undercover performances as a doorman, as well as plenty of video and photographical work online and internationally.

During his residency he has been building a RepRap 3D printer, which is an open source project which started in 2004 in the UK and which now involves thousands of people globally. Once the printer is functioning he’ll experiment with the possibilities of making actual art objects with it, and conclude with a presentation at Titanik Gallery Thursday 8 October 6 pm.

The appropriation of knowledge from outside of the artistic field can be expanded to include the ambitions of non-artists, and by submerging himself in such works the line between art and non-art is blurred.