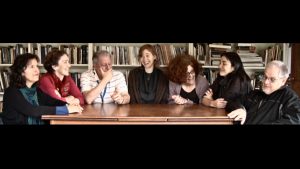 My work shows both elements of installation, performance – episodically reconstructed events in a milieu which is often city, and the character of more or less integrated forms found in the urban landscape.

The point of departure is an idea where the message has both poetic and existential character. Aesthetically I am at home in the conceptual traditions of art and I always address a larger part of the beholder than merely the cognitive and reflecting aspect. I contemplate the fundamental conditions of life in my art.

Sound is an essential aspect of my work, but not the only one, because I use many different matters. I do not produce esthetic objects. My art is more a way of producing relations and processes even in the cases when the final result is an object or an installation or a book etc.

My works are always in relation to a certain room, physical or mental, and to those who take part in it by looking, moving around, listening, feeling, speaking.

I have located many of my projects in urban public places; my expressed desire is to reach people who are not part of the professional art system while also being connected with a more fundamental desire to eradicate the differences between art and life.

In the numerous art works for public space, as well in installations and performances for the white cube, I put a lot of careful work in which I assume the double role of initiator and project leader. The advanced technological elements that I often use mean that the works develop in dialogue with technical expertise in accordance with accepted scientific methods, but together with interaction by audience, public, nature etc. – the unpredictable chance.

The project PSSST in an interactive site-specific project for the urban space of Turku. It takes place on the big digital screen in the city center, where usually different advertisings are being shown.

In certain intervals and between the commercial ads the screen suddenly becomes covered by “snow” as it happens when a TV-sending is disrupted. Then a new and unexpected image appears from the distortion – a face from the public, a citizen of Turku, with the index finger in front of the lips, with the gesture “keep quiet!” This image stays on the screen few seconds, with gaze turned towards the square. Later it slowly disappears followed by the usual commercials. After a period of time a new face appears, again a citizen of Turku, and the gesture is repeated. Art project and advertising seem to be organically incorporated in a continuous stream.

Index finger in front of the lips is a gesture which usually implies that the actor is telling a secret or whispering important information. Or maybe demanding attention?! Or maybe imposing silence?!

Nowadays we are surrounded by flashing images and aggressive sounds in the city environment as well at home and we are overwhelmed by excessive quantities of information. This excess has turned into pollution. Pollution disrupts the activity and balance in human life and in nature. All humans and animals have been forced to sound louder and to act more or less in abnormal way due to excessive noise-, light- and other forms of pollution in the contemporary industrial world.

The project PSSST attempts to create short moments of silence, demanding our voices and behavior to be quiet, thus giving us possibilities for inner peace, for non-verbal communication and spiritual connection. The project aims to reclaim the public space for the art and for the citizens; for stillness, contemplation and gathering of wisdom; to widen the usable habitat, physical and psychological, which has been shrinking due to the present circumstances.

The artist is seeking collaboration with the inhabitants of Turku. The project PSSST will be a true interactive project relying and depending on the enthusiasm and the participation of the public. The preparations will take place during March and April 2011 while the artist is A.i.R. at SUMU Gallery. The project will be shown on the big digital screen in the city center during the summer months of 2011 when Turku is the culture capital of Europe.