Clemens Wilhelm: The Road to Venice

In July 2009 Clemens Wilhelm started out on foot to walk from Munich to the Venice Biennial. The path of more than 600 km took him across the alps in one month, from the Southern German lowlands across the high mountain ranges of the Alps and down to the Adriatic sea. Along the way he took a photograph of the road ahead every 15 minutes. These pictures blend into a slideshow video.

The German filmmaker Werner Herzog once said in an interview that if one wanted to become an artist, one should not spend years in art school but take a long walk alone with a camera. As his graduation project, Clemens Wilhelm undertook this long walk.

The Venice Biennial is arguably the most famous contemporary art exhibition in the world and it is considered a great honour for any artist to be showing there. But this road to Venice is long, unsafe and rocky. However, the challenge of taking on the real road to Venice shows striking parallels to an artist career. When just starting out as an artist, you may ask yourself: “Will I make it to Venice in the end?” But a whole mountain range separates you from that goal.

But Clemens Wilhelm’s video is more than this: the process of walking, the everchanging road itself and spending time with yourself seem equally important as the goal Venice. The Biennial as a goal becomes secondary, as the viewer starts to walk with him, picture by picture. The viewer starts to travel in his/her mind on his/her own imaginary path through strinkingly beautiful mountain ranges, green fields and sundrenched forests.

This FRIDAY 31st (6PM) at Titanik Gallery, for the first time the screening of this film will be accompanied by a mesmerizing musical live performance by ZEN 100.

Clemens Wilhelm (Berlin) is the current artist-in-residency at SUMU/Titanik. 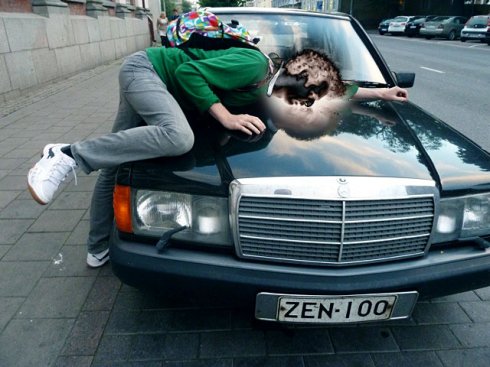