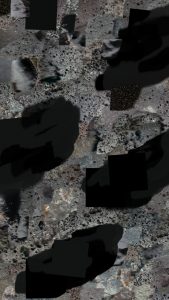 I take pictures, record, and collect material in landscapes that interest me: rocky, icy, or salty terrain in, typically, barren northern or desert places. These landscapes evidence earthly processes; they are manifestations of the physical systems and physical laws that determine the visible “real world” we live in. My visual work and sound work have similar concerns: to create picture planes or sonic spaces which shift between depth and flatness, confuse “solids” and “empty” space, juxtapose the natural and the digital, and hang in a suspended balance just on the line between stillness and motion.

The finished pieces (c-prints; videos; sound pieces; performance-screenings incorporating video, text, and sound) refer to the tangible real world but, in part because they are assembled digitally, remain in a place of phenomenal, subjective experience. At the root of my work is the merging of this “real” space — from my observations, photographs and recordings — with an intangible and conceptual one informed by abstract painting, contemporary physics, and the digital.

The landscapes are crucial to each piece, but they are just one element within a larger set of concerns. In the work, they become something more ephemeral and elusive: sublime speculations; spaces governed more by quantum physics and color fields than geology;  pictures which layer gesture and landscape, and natural and digital color, in the flat, yet vast, expanse of digital space; sound spaces that suggest sources immediately up close and real, and impossibly abstract and far away.

One of my main access points to these disparate territories has been through a provocative theory in quantum physics, which states that pure empty space is not empty, but actually quite dense and active. Because quantum physics is itself abstract, I think it asks to be considered via the language of abstraction (a precedent for such a consideration has been set by numerous artists invoking science and technology in twentieth-century abstract painting). But despite its inaccessibilities, quantum physics does attempt to describe the real world; this, to me, asks for something a bit more discrete than pure form and color. My readings about the quantum have caused me, in turn, to think about natural landscapes in terms of form, in degrees of density, and as positive/negative spaces. Together, these modes of thought have led to my negotiations between the real and the imagined, the natural and the digital, and the representational and the abstract. This scientific space exists for me primarily as a metaphorical stand-in for piecing together what can be seen or felt, and what cannot: an ever-present situation caused by engagements with digital space.

Leah Beeferman is a Brooklyn-based artist with interests in the digital, the geological, abstraction and the north.