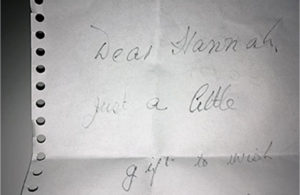 Hannah Ellul is a Glasgow-based artist and musician working primarily in text, performance, video and sound. Much of her work addresses radical political imagination, often in relation to overlooked histories. With Ben Knight she is part of the collaborative project Psykick Dancehall, exploring sound across media: the politics of listening, recording technologies and the voice. Since 2010 they have produced DANCEHALL, a publication about sound and its others. She received her MFA at the Glasgow School of Art in 2010 and is a lecturer at GSA and the department of Visual Cultures at Goldsmiths, University of London, where she completed her PhD in 2017.

At Titanik, Ellul will be developing work about the life of Betty Tebbs, an English political activist who died in January 2017, at the age of 98. From Lancashire, Tebbs was a socialist, feminist and self-declared revolutionary whose long life was spent agitating for political change, including as a trade unionist and anti-imperialist peace campaigner. This is part of an ongoing interest in lifewriting, and how we come to identify personally with political histories. Working with readings from Tebbs’ unpublished memoirs, archival recordings and field recordings, Ellul will develop new live work that presents an impressionistic biography. The project considers how sound and performance might draw out the affective and embodied aspects of political experience; and asks how our encounters with the histories of collective struggle inform renewed efforts of political imagination in the present.